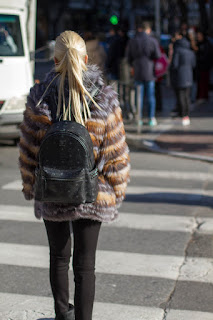 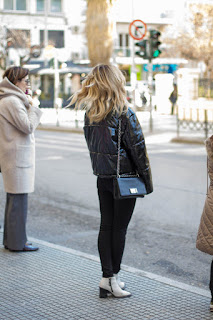 I saw this beautiful girl while I was driving and her look made me stop to meet her. I love her style.. Do you?
She is wearing MCM bag, ZARA glasses ,Converse shoes and an H&M T-shirt. Thank you Alexandra!

I just love him! Check out his Fall 2014 runway and you ll see some amazing moments from the show. This designer is an extraordinary artist full of imagination and creativity (…like a Matthew Barney movie or the latest transmission from Radiohead) (http://www.gq.com/contributors/alex-pappademas)
Filia!

Unfortunately not taken by me
Thom Browne discusses the silhouette and design of his clothing.

Question: What are you best known for?
Thom Browne: When I initially started, I wanted to re-introduce handmade clothing to guys — to young guys, because I really felt like so many of them were . . . were somewhat running away from it because it was always done either for their father in a . . . in a more conservative way . . . So I wanted to really re-introduce it in a way that it . . . that felt . . . it really felt like it was for them. And that was ’50s, ’60s inspired clothing that just fit very specifically — the jackets being shorter; the trousers, you know, narrow and slimmer. And just like changing the mentality of what was, you know, up until now I think regarded as a very . . . like a suit. Like they didn’t wanna become . . . they didn’t wanna be a suit. And I wanted to do the suit in a new way that made them feel like it was for them in a cooler way.  When I lived in L.A. and I used to buy a lot of vintage clothing, and you know I would tailor it in a way for myself that was exactly this. And that was, you know, over 10 years ago. So in a way it’s . . . it’s been longer than actually how long my business has been open; but it’s something I really knew that if I . . . if I wanted it, I knew that there would be somebody else that would be interested in . . . in this type of thing.